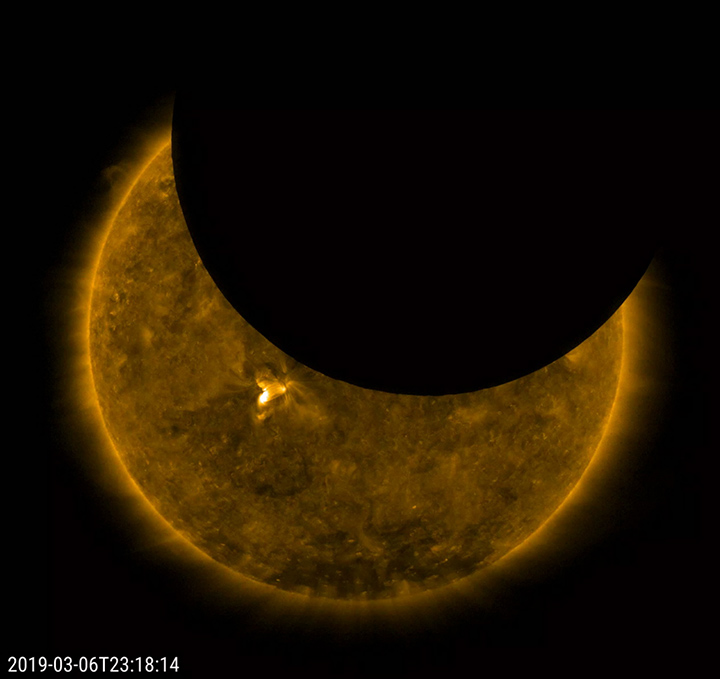 On Mar. 6, 2019, SDO observed a long lunar transit - with a twist. The shadow of the Moon in SDO's images first touched the limb of the Sun at 2200 UTC (5pm EST) on Mar. 6, making its way across and finally left the solar disk at 0209 UTC on Mar. 7 (9:09 pm EST, Mar. 6). The moon's apparent reversal is caused by SDO first overtaking the moon in its orbit, then the moon catching up as SDO swings around Earth's dusk side. During the transit the Sun moves in the frame as the telescopes cool and flex in the lunar shadow. Note that the edge of the Moon is very sharp because it has no atmosphere. Credit: Solar Dynamics Observatory, NASA. This is the last Picture of the Week produced by Steele Hill. We would like to thank Steele for 9 years of SDO POTWs! He also selects POTWs for SoHO and STEREO. With 23 and 13 years on-orbit, that means Steele has picked over 2000 POTWs! Thanks for looking at all those beautiful images and finding a favorite almost every week!