This is the Solar Dynamics Observatory Mission blog. It will consist of mission status, news, and event updates.

Just two weeks ago the Full Moon and Mars had a bright conjunction in the night sky. Tomorrow the New Moon will glide between SDO and the Sun for a 47 minute lunar transit. Here's the SDO FOT movie of the transit. The transit starts at 1906 UTC (3:06 pm ET) and ends at 1953 UTC (3:53 pm ET), so it's at a perfect time for watching in the US. The Moon will cover at most about 44% of the solar disk. More important to SDO, it will cover two of the fine-guidance sensors (the red squares in the movie). This means our view of the Sun may jitter a bit during the transit, but SDO will recover soon after the Moon moves off the disk. Enjoy the transit, and keep watching the planets Mars, Venus, and Jupiter as they move across the evening sky.

The SDO Quarterly LongSet Predicts have been delivered. We have two lunar transits in the next three months. The highlights are listed below: Dates and times in parentheses are GSFC Local time. Timings of maneuvers are tentative and may change. 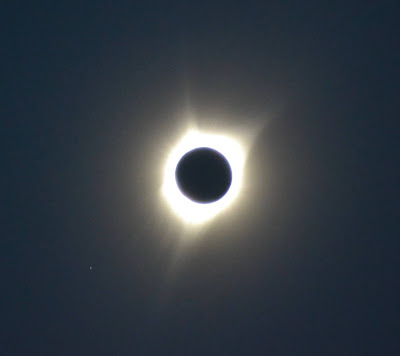 Three years ago a total solar eclipse passed over the continental United States, from Oregon to South Carolina. I spent the days before the eclipse at SolarFest in Madras, OR, and saw the eclipse from a site north of Madras. It was a beautiful eclipse. Here is my best photo, using a NIKON D3100 with a 200 mm lens. You can see the three rays and even some polar rays. The three rays were much longer in person and I remember them as blue. The bright dot to the lower left is the star Regulus.

But this is a post about eclipses on other planets. 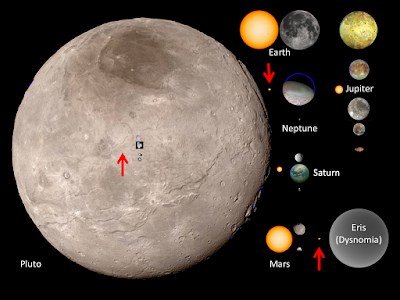 Here is an illustration of all the moons in the solar system that could cause a significant eclipse that you could see from the surface of the planet. The red arrows point to the yellow image of the Sun at Neptune, Pluto, and Eris. Even though those moons are physically small, the Sun appears to be even smaller and can be eclipsed by Triton, Charon, and Dysnomia.

The shadows of the four Galilean satellites have long been seen on Jupiter. Because the moons appear to be so much bigger than the Sun, these shadows are called occultations. An annular solar eclipse has been observed when Phobos' shadow passed over the rovers Opportunity and Curiosity.

It interesting to think about what an eclipse would be like on Neptune, Pluto, or Eris. The primary moon appears so much larger than the Sun for those planets. The amount of heat from the Sun is already a small fraction of what we receive at the Earth. Would you even notice if such a dim light was occulted?

Call them transits, occultations, or eclipses, astronomers are quite excited when one thing in the universe passes in front of another. The Kepler and TESS satellites use the dimming caused by planetary transits across their home stars to discover those planets and even study the atmosphere of the planet. Occultations of stars by Pluto were used to study the atmosphere of Pluto years before New Horizons was launched. Occultation of the New Horizons radio as it passed behind Pluto was also used to study Pluto's atmosphere. The beauty of the 2017 Total Solar Eclipse is just the icing on the cake.

Next chance for people in the US to drive to an eclipse is 8 April 2024. This eclipse will be near solar maximum. That means the corona should look more complex and interesting. I hope a spot as good as Madras can be found for that eclipse.

SDO performed a station keeping maneuver (SK #21), Wednesday at 2210 UT (6:10 pm ET). For about 15 minutes beofre and after the maneuver SDO science data may be blurry or missing.

Looking for a new way to enjoy SDO Data?

Grammy award-winning artist Beck took an ethereal journey to the stars for his 2019 record "Hyperspace." Now, he has taken this cosmic journey a giant leap forward in a collaboration with NASA's Jet Propulsion Laboratory and artificial intelligence creatives OSK. The result: A visual album experience titled "Hyperspace: A.I. Exploration."

The new visual album, unveiled today (Aug. 12), is an "interstellar journey combining publicly available NASA mission images, curated with assistance from NASA JPL, visualizations, animations and data with revolutionary Artificial Intelligence tech," with Hyperspace's songs as the soundtrack," according to a Beck statement.

The SDO video is here: https://youtu.be/iE7PBovWh-E

SDO is performing the EVE cruciform calibration manuever today, starting at 1130 UTC (7:30 am ET) and running for about 8 hours. During this maneuver science data may be missing or blurry.

SDO will execute momentum management maneuver (MM) #38 today starting at 1930 UTC (3:30 pm ET). The maneuver should take about 30 minutes. During a maneuver SDO science data may be missing or blurred. These maneuvers are needed to keep SDO accurately pointed at the Sun and taking data.

» SDO Manuevers and Plans for July through September - Tue, 30 Jun

SDO will perform the following maneuvers during the next three months. During a maneuver science may be blurry or missing. Other important dates (such as handover and eclipse seasons) are included for your information. Many of the calibration maneuvers were delayed due to the COVID-19 closures.

The magnetic field of the Sun has several patterns and follows a few laws. Hale’s Polarity Law is one of those. It says that the leading and trailing magnetic fields in an active region have the opposite direction and the directions flip in the next sunspot cycle. 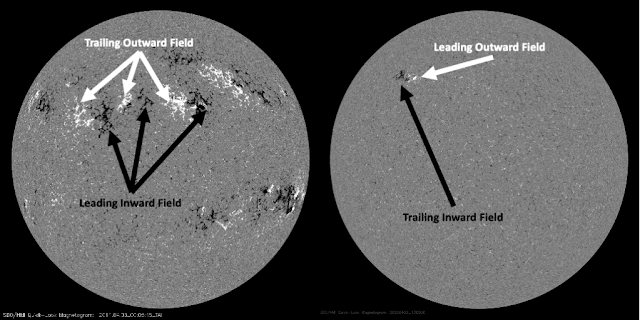 Here is proof of the flip going into Solar Cycle 25. On the left is an HMI magnetogram from April 3, 2011, during the rise to the maximum of Solar Cycle 24. There are several active regions in the Northern hemisphere of the Sun. The magnetic field going into the Sun is shown as black and the outward field in white. Arrows point to three active regions (AR 11180, 11183, and 11184, right to left arrows) and show that the inward field leads the outward field.

On the right is a magnetogram from April 2, 2020. A high-latitude active region (AR 12759) has the outward field is leading the active region and the inward magnetic field is behind. AR 12759 is at 28 N (the same latitude as Cape Canaveral, FL, SDO’s launch site).

Hale’s Polarity Law is one of the reasons for the confusing names of the solar cycle. People see an 11-year sunspot cycle when they look only at sunspots. The reversal of the leading and trailing fields means that two sunspot cycles are necessary for the Sun to return to the same conditions (the 22-year solar cycle). But we still count Solar Cycles. So Solar Cycle 25 is the 25th sunspot cycle since records the numbering began in 1755.

The high-latitude, oppositely-directed field active region AR 12759 is just the beginning of Solar Cycle 25.The leading field is an outie!